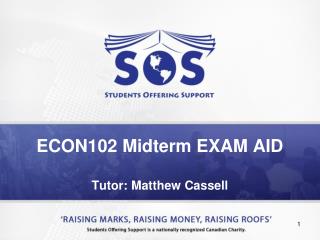 ECON102 Midterm EXAM AID Tutor: Matthew Cassell. Intro and Overview. Important Notes. Economics courses tend to be very heterogeneous in coverage This review session is targeted at all ECON 102 students Be cognizant of the chapters you need to know and the ones you don’t