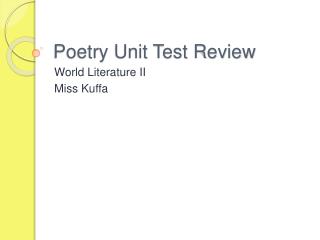 Poetry Unit Test Review. World Literature II Miss Kuffa. In “The Stolen Child,” the fairies do what to a human child? The description of the island, herons, stolen cherries, and moonlight at the beginning of the poem help to create an atmosphere that is mystical OR amusing OR serious . Poetry Test Review - . 2012. question 1. what is an iamb? repeated pattern of unstressed followed by a stressed syllable

Poetry Unit Review - . important test info. you may use your notes. you may not use your textbook. plan ahead, so you can

POETRY UNIT REVIEW - . if you were coming in the fall, i’d brush the summer by with half a smile and half a spurn. as

Poetry Unit Review - . your notes are due tomorrow!. √ poetic device chart (knowledge rating scale) √ how to write a

Unit test Review - . be prepared to demonstrate knowledge about: -use of archetypes in novel -how characters develop

Unit Two Test Review - . ms. macemore. what was unit two all about??. unit two was titled “a new nation,” and all the

Unit 3 Test Review - . write the numbers 1 – 20 on a piece of paper. instructions. there are 20 multiple choice

Unit 4 Test Review - . answers. chapter 11. cotton gin. who invented ? eli whitney why is it significant? led to the

Unit VIB Test Review - . q: simon bolivar was inspired by the a: enlightenment and american revolution q: king of prussia