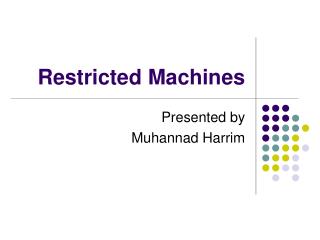 Restricted Machines. Presented by Muhannad Harrim. The Turing Machine. Turing machines are extremely basic abstract symbol-manipulating devices which, despite their simplicity, can be adapted to simulate the logic of any computer that could possibly be constructed. Restricted Values - Chapter 9 discovery 1. restricted values. 1. complete the table of values for the given rational

The Restricted Months - . a man with signs of fatigue and frailty went to our prophet mohamed (peace be upon him). our