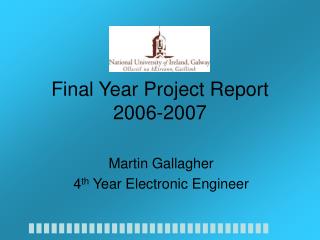 Making a bibliography for your final year project - . chris price. example project. goals of the work identify the

A PROJECT REPORT ON - . digital loop carrier (dlc). under the guidance of mr. a.b. singh. submitted by: palash gupta

FINAL REPORT LAYOUT - . criteria for formatting of the project report. the front cover. the cover of the report should be