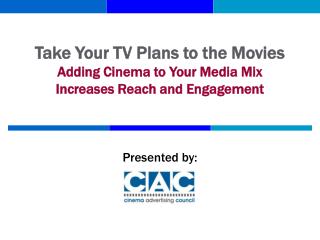 Take Your TV Plans to the Movies Adding Cinema to Your Media Mix Increases Reach and Engagement. Presented by:. Where Does Cinema Fit in the Media Milieu?. Some ad agencies plan Cinema in the Digital Out-of-Home Group Others place Cinema in the TV Broadcast group CINEWORLD MOVIES FOR JUNIORS - . the opportunity. a fantastic opportunity to build a multiplatform association with one

Watch Online English Movies - If do you want to watch english online movies .the tvmovieshow is best options for watch