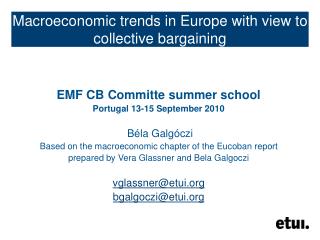 Macroeconomic trends in Europe with view to collective bargaining

Macroeconomic trends in Europe with view to collective bargaining

The World Trade Organization - . the wto was created during the uruguay round of gatt to police and enforce gatt rules

The Trade Council - . the trade council is the governmental export and investment promotion organisation under the

Truman Doctrine &amp; The Marshall Plan - . how did the truman doctrine and marshall plan escalate the cold war? were

The Industrial Labor Society - . &quot;what is the chief end of man?--to get rich. in what way?--dishonestly if we

Feb. 22, 2014 International Symposium on New Direction in Higher Education for - The development of global human