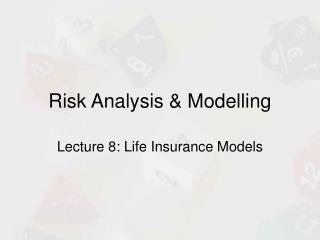 Risk Analysis & Modelling. Lecture 8: Life Insurance Models. www.angelfire.com/linux/riskanalysis RiskCourseHQ@Hotmail.com. Life Insurance. The use of Statistics and Mathematics in the Modelling of Life Insurance dates back to the 17 th Century

Risk Analysis and Management - . m taimoor khan taimoorkhan@ciit-attock.edu.pk. risk management. it is the analysis and PEST RISK ANALYSIS PRA - Why is a pra done? . to protect the country's agriculture from damages that can be caused by