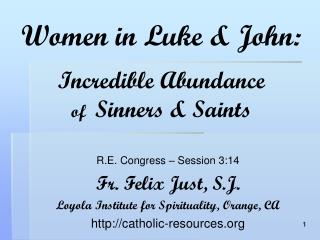 JOHN THE BAPTIST - . what was his mission?. luke

The Word Is Alive The Gospel of Luke - . chapter two presented by tony gillon. chapter two. luke 1:5–2:52 - the infancy

A presentation by: Women for Human Rights, single women group(WHR) - . background. nepalese society is patriarchal, but

TITLE: Guilt: Being released from the weight of sin - . text: luke 7:36-50 theme: god’s forgiveness motivates the

John, chapter 6 - . niv john 6:1 some time after this, jesus crossed to the far shore of the sea of galilee (that is, the