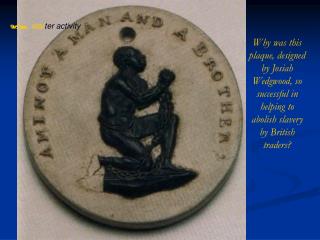  star ter activity. Why was this plaque, designed by Josiah Wedgwood, so successful in helping to abolish slavery by British traders?.  Key words: abolition petition. Why was slavery abolished?.  LOs. To identify at least 5 different methods used to abolish slavery

Why was slavery abolished? - . learning objective – to be able to understand why slavery were abolished in britain in

How and why was the Trans-Atlantic slave trade abolished? - . how?. out of the underground railroad and other movements

Why was the Slave Trade abolished? - . describe reasons why great britain finally abolished the slave trade in 1807.