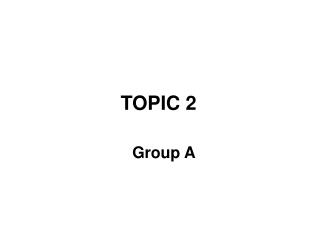 TOPIC 2 Group A The heart pumps blood throughout the entire body The heart beats approximately 72 beats per minute supplying cells of the body with nutrients they need to survive Heart When looking at an image, the right and left are defined as the right and left of the patient.

Topic 2 - . amplitude modulation. general definition:. the amplitude of a sinusoidal carrier is varied in accordance with

Topic 2: Cells - . (12 hours). 2.1.1 outline the cell theory. include the following. living organisms are composed of

Topic 2 - . changes in matter. properties of matter. physical properties are used to describe a substance chemical