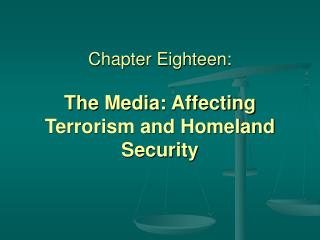 Homeland Security Effects on S&amp;T in the US - . david heyman director and senior fellow center for strategic and

Module 4- Department of Homeland Security (DHS): Why and How They Use Visualizations - Visual analytics detect the

FACE RECOGNITION HOW BIOMETRICS WILL BE UTILIZED TO COUNTER TERRORISM - . presented by: carlos buskey. the last minute

Terrorism &amp; The USA - . what is it &amp; who is involved?. terrorism- violent acts which are intended to

TERRORISM AND THE MIDDLE EAST - . by: julia yrani. so, what’s the question!. research question: what effects do