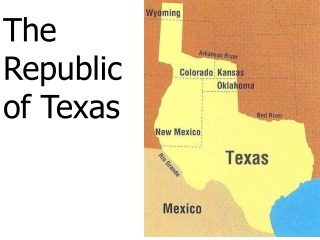 The Republic of Texas

The Republic of Texas

Road to Independence - . battle of gonzales. the number of mexican troops was increasing in texas and people were

The Texas Revolution - . mexican constitution of 1824. the document under which texas colonists were invited to emigrate

The Lone Star Republic - . houston forms a government (1836). sam houston was elected as the first president of texas and

Texas Revolution - . chapter 10. texas volunteers. joined the texas army because they had a desire for adventure and a

Famous Texans - . texas has a very proud past that is rich with history and courageous citizens whose service and

The Texas Revolution - . 1836. significant individuals. george childress. chaired the committee in charge of writing the

Who were the major leaders that lead Texas down the road to independence? - . moses austin, stephen f. austin, martin de

The Republic Of Texas - . chapter 14 sec 2. the republic of texas. trappers and traders were not the only americans

The Texas Revolution - . causes of the revolt the texas revolution the aftermath. westward movement. americans

Causes of Texas Revolution - . fredonian rebellion. led by edwards brothers in 1826 claimed area in nacogdoches was no