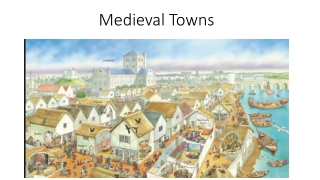 Medieval Towns. Objective Historians will be able to describe what life was like in a medieval town through a reading response, and gallery walk activity. Preview Questions. Why would people come to the market place? How are people here similar and different?

Life in Medieval Towns - . introduction. at the start of the middle ages, most people lived on manors in the countryside.

Aim: Were medieval towns superior to life on the manor? - . do now : if your parents were willing to take care of you

Paper Towns - . by john green. this movie influenced the style of the book and there were references in the book about

Shanty Towns - . life in cities of the developing

Sundown Towns - . “the thing you didn’t know what it was”. insley smullen. to fulfill all requirements for csi 100

Shanty Towns - . ib sl. what are they?. found mainly in ledc’s. they are informal and built from anything and

Eco-Towns - . what is an eco-town?. a sustainable development work towards “zero-carbon” status. features of an