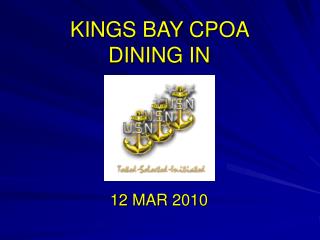 KINGS BAY CPOA DINING IN. 12 MAR 2010. History The term dining-in derives from an old Viking tradition celebrating great battles and feasts of heroes by formal ceremony, which spread to monasteries, early-day universities and to the military when the officer's mess was established.

Dining for Women - . to decrease maternal and neonatal mortality in remote, rural areas. one heart world-wide’s

God Loves You - . from 1 &amp; 2 kings. god says this: i love you ! have you thought about that? have you meditated

The Need for Formal Dining Etiquette - . have you ever attended a formal dining event and thought: which water glass do i