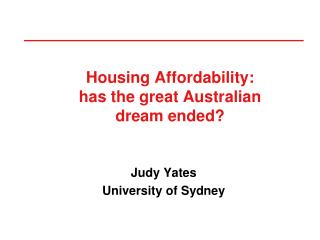 Housing Affordability: has the great Australian dream ended? Judy Yates University of Sydney Outline Current situation (and why different from US) How did we get there? Implications and explanations of changes that have occurred What is needed for a fairer housing system?

Chapter 9: The Housing Expenditure - . discuss the options available for rented and owned housing and whether renters or

Housing Opportunities for Persons With AIDS - . competition overview may 28, 2008 presented by office of hiv/aids housing

Housing and Health - . safina koreishi preventive medicine conference 10/16/2008. “everyone has the right to a standard