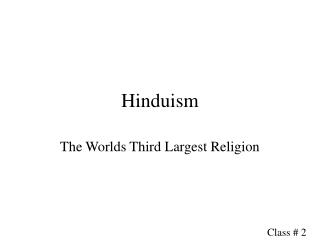 Hinduism The Worlds Third Largest Religion Hinduism Review Which is the symbol of Hinduism? Who was the prophet of Hinduism? Jesus, Buddha, Mohammed, Krishna When was Hinduism formed? 1963 AD, 3000 BC, 100000 BC, 1844 AD How might we recognize a Hindi? Principles of Hinduism

Hinduism - . hinduism video. world population. 900 million. origins. hinduism is made up of a variety of different

Hinduism - . hinduism. hinduism is a religion that began in india. the religion is the worlds oldest religion. there are

HINDUISM - . “ hinduism is as much a way of life, as it is a religion. ”. general. hinduism is one of the world’s

Hinduism - . background. hindu practices come from the beliefs of many groups in india aryans migrated to india - brought

Hinduism - . when i read the bhagavad-gita and reflect about how god created this universe everything else seems so

Hinduism - . thai studies - religion in thailand. facts about hinduism. hinduism is the oldest surviving religion of the

What is Hinduism? - . one of the oldest religions of humanity the religion of the indian people gave birth to buddhism,

What is Hinduism? - . one of the oldest religions of humanity the religion of the indian people gave birth to buddhism,

HINDUISM - . rituals. namaste. what is namaste?. - namaste is a sanskrit word that means “i bow to you.” - namaste is

Hinduism - . hinduism is a way of life, a way of light, and a way of truth...  . the beginnings of hinduism. hinduism

HINDUISM - . every spring the ganges river swells with water as snow melts in the himalayas. the water brings life as

Hinduism - . hinduism is more like an encompassing way of life, then a religion. hinduism has grown to become the world's

Hinduism - . the origin. some 5,000 years ago, hinduism began to emerge from early aryan literature. this makes it the Chapter Nineteen India, China, and Japan: From Medieval to Modern Times - . culture and values cunningham and reich and