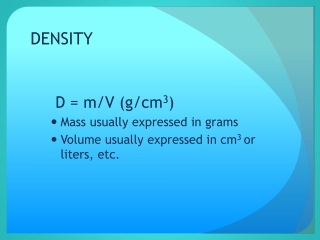 DENSITY. D = m/V (g/cm 3 ) Mass usually expressed in grams Volume usually expressed in cm 3 or liters, etc. Density. Density = amount of matter per unit volume Density is the ratio of mass to volume If the volume stays the same and the mass increases . . . the density will increase