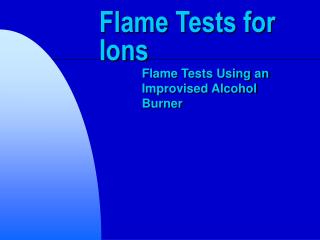 Flame Tests for Ions Flame Tests Using an Improvised Alcohol Burner Purpose When a metal salt solution is burned, the metal provides a colored flame. Each metal ion gives a different colored flame. Flame tests, therefore, can be used to test for the absence or presence of a metal ion

Fluids and Pressure - . chapter 3. fluids. any material that can flow and take the shape of its container *fluids include

Close ReadinG - . strategies for teaching students how to do a “close reading” of a text. what is “close