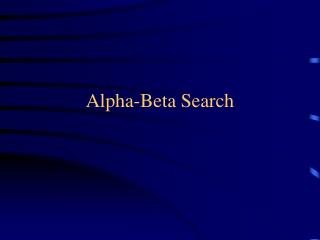 Alpha-Beta Search Two-player games The object of a search is to find a path from the starting position to a goal position In a puzzle-type problem, you (the searcher) get to choose every move In a two-player competitive game, you alternate moves with the other player

Diversity: alpha – beta – gamma - . beta diversity is a concept that helps us to cope with the fact that not every

The ABC's (or Alpha, Beta, Gamma) of Radioactivity - . expectations. swbat state what radioactivity is, where these rays

Minimax with Alpha Beta Pruning - . the minimax algorithm is a way of finding an optimal move in a two player game.

“Efficient” Markets and the Search for Alpha - . a discussion about the efficient market hypothesis, the financial

Announcements - . reading and homework for this week late policy on homework: 10% per day, unless you ask for extension