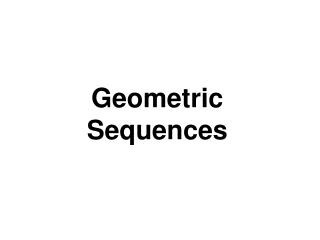 Geometric Sequences. Definition of a Geometric Sequence. A geometric sequence is a sequence in which each term after the first is obtained by multiplying the preceding term by a fixed nonzero constant. The amount by which we multiply each time is called the common ratio of the sequence.

The van Hiele Model of Geometric Thought - . define it …. when is it appropriate to ask for a definition?. a definition