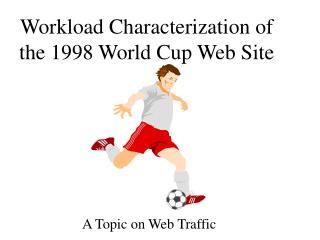 Workload Characterization of the 1998 World Cup Web Site. A Topic on Web Traffic. Why Study of Web Traffic Needed?. To determine how web server workloads are evolving? Effect of caching architecture on web servers? Improvements needed in the architecture of World Wide Web?

Workload Characterization and Prediction - . joshua ferguson. overview. what is a workload?. how are workload patterns

The World Cup - . starter. for one minute and working with your partner name as many countries as you can who have taken

Site Characterization - . instructional goal: upon completion of this topic the participant will better understand the

The World Cup - . by kenneth black. the team i would like to win is italy. they are going up against england in manaus,

-. Site Characterization of the Canarian Observatories: - Our

WORLD CUP! - . by: karson pilgrim, and christian hidou. land scape. there are many things at brazil like theirs mountains