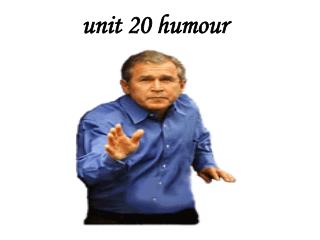 unit 20 humour Dustin Hoffman Charlie Chapline Mr bean Pre-reading Photo 1: The comic of the 1930s “ Laurel and Hardy”. They are funny because they are opposites.

Unit 17 Laughter - . 桂山中学 陈伟. lesson one funny stories. q: what's the difference between a monkey and a flea?

Unit 20 Humor - . act as a circus clown. leading in who can say something about

Irony,Satire and Such - . “a taste for irony has kept more hearts from breaking than a sense of humor, for it takes

Unit 20 - . humour. reading. presentation. today we come to the reading. it’s about some laughing matter. and we are

ADVERTISING Trust Me, I’m an advert - . aims of the unit to introduce concepts and techniques in advertising. analyse