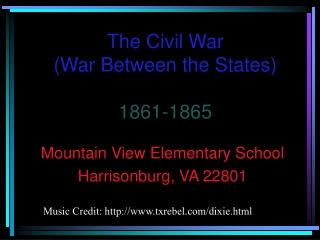 The Civil War (War Between the States) 1861-1865. Mountain View Elementary School Harrisonburg, VA 22801. Music Credit: http://www.txrebel.com/dixie.html. The War Between States. The war lasted from 1861 to 1865 The war started and ended at Wilmer McLean’s house. Picture Credit:

Photography and the Civil War - . images of war before the civil war. winfield scott at battle of veracruz by nathaniel

Second Manassas, Antietam, and the Emancipation Proclamation - . lsn 10. end of the peninsula

The Battle of Antietam - . by: peter gillespie, angel sanchez, and casey roesch . historical

THE BATTLE OF ANTIETEM - . by: kyle . the battle of antietam. general robert e. lee confronted the union army led by