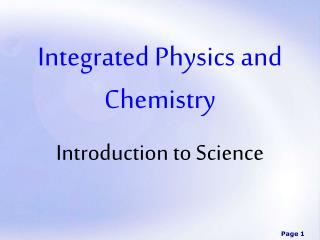 Integrated Physics and Chemistry - . by zack ruiz. teks #1 assignment. 1) scientific processes. the student, for at least

Goal: Understand chemistry, biology and physics - Of the bay, at all points in the bay, for all time. goal 2: understand

SCI 111: Introduction to Physics and Chemistry - . chapter 1 what is science?. how would you describe this baseball to

Chapter 4 Chemistry and Physics of Fire - . introduction. to appreciate how fire is controlled, we must first understand

Chapter 4 Fire-Related Chemistry and Physics - . introduction. to appreciate how fire is controlled, we must first