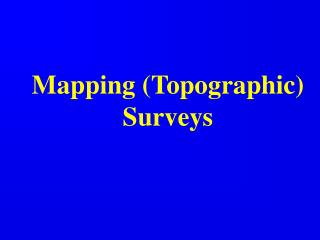 1/9/13 Topographic Mapping - . pre-break recap warm-up: fill in the chart. learning goals:. by the end of this lesson you

Mapping Technology and Topographic Maps - . chapter 1, lesson 3 and 4. one bit of a digitized image, often appearing as a

RULES of Contour Mapping - . topography. the study of the shapes and features of the earth’s surface. topographic maps.

The Fundamentals of Reading Topographic Maps! - . by andrea anderson. what will you learn????. what is a topographic map?

Coordinate System Unit 1: Mapping the Earth - . this unit is comprised of two main concepts; our coordinate system based