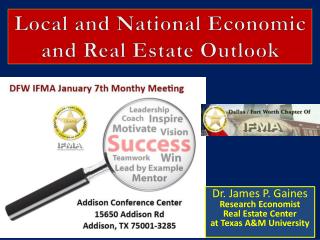 The Canada Real Estate Market and Outlook - Canada real estate is one of the most stable industries in canada nowadays.

Local Real Estate Attorney - Investing in property is a very important decision in one's life. it is always good to hire

Economic Review and Outlook - . university of phoenix january 23, 2008 david b. johnson zhp capital. what they say. what