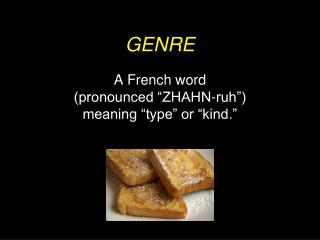 GENRE. A French word (pronounced “ZHAHN-ruh”) meaning “type” or “kind.”. Consider some basic movie genres: . Western Mystery Romance Thriller Comedy Documentary Horror Children’s. Barsam lists some genres in the opening chapter. . Are there any that you would suggest that he add?