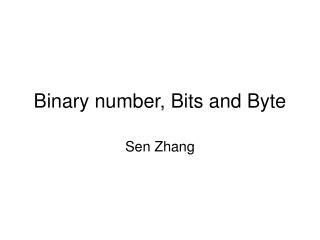 Binary Compounds - . binary compound. a compound made up of two parts, a positive part and a negative part. h 2 o. binary

A few methods for learning binary classifiers - . fundamental problem of machine learning: it is ill-posed. slide thanks

Stratified Analysis of A Binary Endpoint and “Beyond” - . christy chuang-stein statistical research and consulting

Beyond Base 10: Non-decimal Based Number Systems - . what is the decimal based number system? how do other number systems