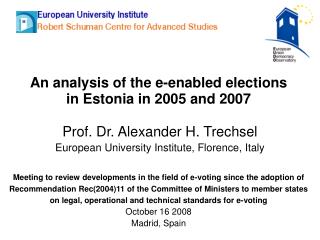 An analysis of the e-enabled elections in Estonia in 2005 and 2007 Prof. Dr. Alexander H. Trechsel European University Institute, Florence, Italy Meeting to review developments in the field of e-voting since the adoption of

An Example in the Design and Analysis of an Algorithm - . demonstrates: -- recurrence relations -- design techniques

An analysis of the e-enabled elections in Estonia in 2005 and 2007 - . prof. dr. alexander h. trechsel european

e-Estonia - . estonia as a country is highly advanced in it coverage : estonia is completely covered by digital mobile

The Role of the Media in Elections - . essential question: how should political campaigns, election financing, and voter

An Analysis of the Cyber Security Strategy (2008) of Estonia - . based in part on itu q.22/1 report on best practices for

Road safety in Estonia in an European context - Presentation outline. introduce etsc and its pin programmepresent some of

The Psychology of Voters in Elections - . michael bruter sarah harrison. the psychology of voters. outline of