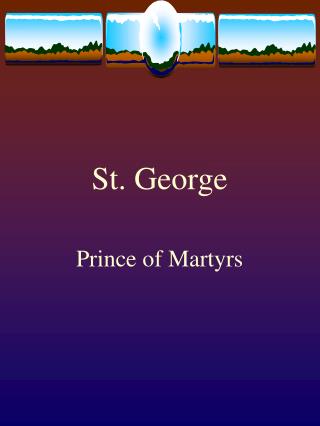 Know Your Presidents George Washington and Abraham Lincoln - . by: mrs. charnick. click on a president to learn about

Of Mice and Men - . in the marxist lens. created by corbin fitzgerald. featuring. george. and lennie. and rabbit. who.

Gilbert and George - . gilbert prousch and george passmore are two artists that work together as a collaborative duo

George Washington Age, 67 - . died december 14, 1799 peacefully in his home suffering from a bad cold, fever and a throat

George Bernard Shaw - . by: ebony brown. who he was. he was an i rish playwright . he was a cofounder of the london

Grenada Tourism & St. Georgeâ€™s Tourism - St. georgeâ€™s is the capital of grenada. the town is surrounded

Rossetti's cartoons for the stained-glass Story of St. George and the Dragon - . s t. george of cappadocia is the