The United States in the 1950’s - PowerPoint PPT Presentation 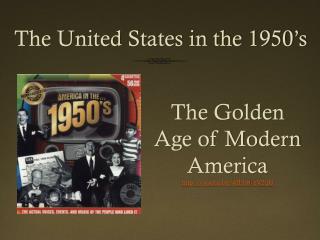 The United States in the 1950’s. The Golden Age of Modern America http://youtu.be/4fEb8-zV2qU. Identify and explain the actions taken by the US government to limit communism at home. Methods. Propaganda Campaigns Witch Hunts. Government Interference.