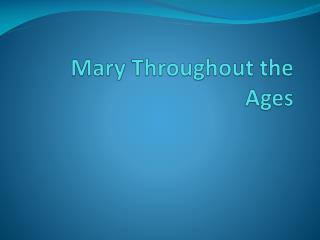 Mary Throughout the Ages

Mary Throughout the Ages. The Marian Age. 1830 – apparition to Catherine Laboure and devotion to the MiraculousMedal 1840 - Sister Justine Bisqueyburo receives the devotion of the Green Scapular 1846 - La Salette Apparitions

Mary Throughout the Ages

THE MIDDLE AGES - The condition of women. the middle ages. woman feeding chikens , from tacuinum sanitatis, an italian

MARY MOTHER OF JESUS, MOTHER OF GOD - . part iib: mary’s motherhood. “who am i that the mother of my lord should come

Mary and the Saints - . rcia inquiry. what are the catholic church's views regarding mary? it is important to note a

Mary in the Life of the Church