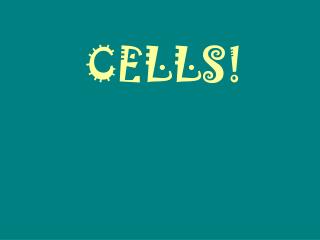 CELLS!. CELLS - APK. What are cells? Where are they found? Where do they come from? What are they made of?. CELLS. Listen Write down anything that you think might be important later! When we ’ re done, see what you can find about cells in your COACH or in your text!. Cell Theory. 3 The Cellular Level of Organization - . an introduction to cells. cell theory developed from robert hooke’s research

Cells - . i. basic history. every. _______ living thing, from the tiniest bacterium to the largest whale, are made of one

Diseases of Blood Cells - . back to basics. blood is a liquid tissue a mixture of cells and water the water contains

Chapter 2 Nerve Cells and Nerve Impulses - . membrane : separates the inside of the cell from the outside environment