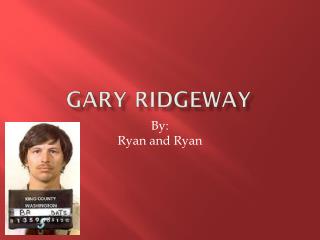 Gary Ridgeway. By: Ryan and Ryan. Background. Know as the “Green River Killer” Murdered 48 women along the Green River in Washington Born in Salt Lake City, Utah February 18 , 1949 He was the middle child of the family Moved to Washington when he was 11. Childhood. gary - Hello, everybody. my name is gary chen, and i am fifteen years old. i like to play computer games and some sports.

GARY LINEKER - . “as the world gets smaller, there’s never been a better opportunity to get into languages.”. lucy

Gary Shoats - Has traveled all over the world for photography representing the wildlife. after working in his family

Gary Sazer - Is a man of many talents. gary sazer is a husband and father of 3 sons. his sons describe him as a kind and