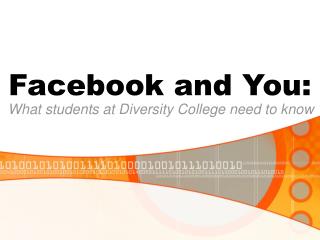 Facebook and You:. What students at Diversity College need to know. What is Facebook?. According to Facebook.com: “Facebook is an online directory that connects people through social networks at schools.” Facebook, advertising and its impact on YOU! - . how social networks infiltrate the wallets and habits of its users.

Facebook Updates You Must Know - Here, in this presentation, you can easily get to know about some of the most important

Zuckerberg and Facebook - . “understanding people is not a waste of time.” -mark zuckerberg, co-founder of

Facebook AND Google - . by samantha healy, rachel gale and kieran sawyer. facebook. launched in 2004 and was originally

See you on Facebook or Twitter? - The use of social media by 27 news outlets from 9 regions in argentine, colombia,

How Are You Not On Facebook? - Phil mcdaniel valerie kielmovitch dan moore claire robinson university of south carolina

Why you should buy facebook followers? - Buy fans and followers is the best way to promote your business in social

Why should you buy Facebook Likes? - Effectively, this technique can help to brand at the beginning. the more people

How Are You Not On Facebook? - . phil mcdaniel valerie kielmovitch dan moore claire robinson university of south carolina

Why I Use Facebook. (And why you should, too.) - . elizabeth a. evans unc-chapel hill its teaching and learning december