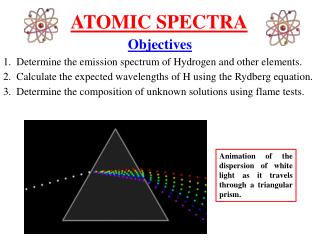 Atomic Line Emission Spectra and Niels Bohr - . bohr is credited with the first modern model of the hydrogen atom based

What is atomic spectra? - . in general the light which atoms give off is made up of specific wavelengths, called lines;

Line Spectra and the Bohr Model - . flame test colors. color’s are emitted when atoms are given energy the actual color

Atomic Spectra - . continuous spectra. the (visible) hydrogen spectrum. other spectra. notes on the procedure. do steps