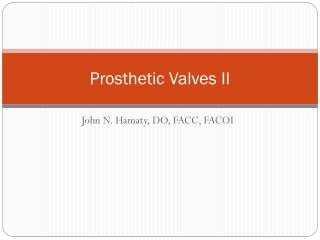 Prosthetic Arm - . 2019-2020. learning objectives. by the end of the session, participants will be able to: explain the

Recommendations for the Echocardiographic Evaluation of Prosthetic Valves: What is New? - 43 rd pha annual convention.

Prosthetic limbs - . the main object is to design a prosthetic limb and develop it to give motion that simulate the exact

VALVES (GATE AND GLOBE VALVES) - . presented by atif tariq emp # 1140. contents of presentation. what is valve?