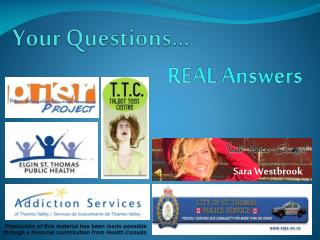 Your Questions…. REAL Answers. Sara Westbrook. Addiction Defined. Addiction is when a person has compulsive, often uncontrollable drug use in spite of negative consequences. NO SINGLE FACTOR DETERMINES WHETHER A PERSON WILL BECOME ADDICTED TO DRUGS

Brave New Discussion Questions - . in your groups, write 2 higher-order discussion questions for the novel on the

16. Consequences of Population Size in Relation to Land - Questions from lectures, with answers provided by ron lee. the

Indirect Questions - . stage 25. direct questions. you have met many sentences like this: ubi clamorem audivit? who heard