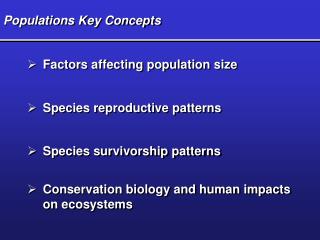 How Populations Evolve - . gene pool. all genes present in population. microevolution. change in relative frequencies of

Measuring Evolution of Populations - . populations &amp; gene pools. concepts a population is a localized group of

21.2 Studying populations page 711 - . key concepts: how do ecologists determine the size of a population? what causes

Key terms in Sampling - . sample: a fraction or portion of the population of interest e.g. consumers, brands, companies,

POPULATIONS - . definition: all the members of a species that live in one place at one time. properties of populations.

Section 14-3 and 14-4 “Population” - . write everything that is underlined. section 14.3 key concept: each population

Section 9.1: Mechanisms of Evolution and Effect on Populations - . sbi3u1. evolution of the population. although

Basic Concepts - . any situation in which individuals must make strategic choices and in which the final outcome will