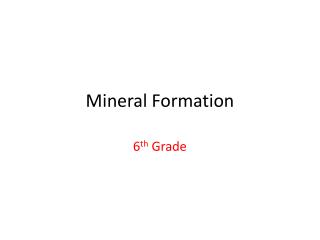 Mineral Resources and Mining - . 13. chapter. talk about it is it important to think about the sources of the minerals we

ROCKS - . what is a rock?. rock - a naturally-occurring mixture of minerals, organic matter and other rocks. what is the

Classification of Minerals - . nearly 4000 minerals have been identified on earth (most of which we don’t really worry

Which picture is a mineral? Why? - . the one on the left. minerals. atoms make crystals, crystals make minerals, and

The Formation, Mining, and use of minerals - . chapter 3 section 3. environments in which minerals form. evaporation salt

Minerals - . day 3 student notes quiz monday!. minerals. elements are the basic building blocks of minerals ! but what is

What is a rock? - . a rock is a mixture of minerals and other materials. . formation of rocks. igneous: about 150 rocks.

Mineral &amp; Fossil Fuel Formation and Extraction - . apes 2012. warmup …. how does the uneven distribution of

HOW MINERALS FORM - . how minerals form. 1. crystallization – the process by which atoms are arranged to form a

How Minerals Form - . what are the processes by which minerals form?. the minerals that people use today have been