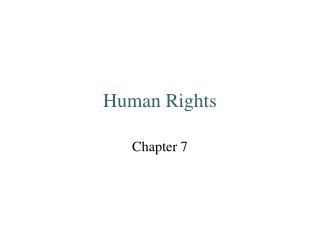 Human Rights. Chapter 7. Human Rights. What if a doctor found out that someone had a fatal heart condition and knows people that could use the organs to stay alive? She could inject some poison, the patient would never know and several people would be able to live long lives.

Global Issues: Human Rights - . what are considered the foundation of freedom, justice, and involves the belief in the

Human Rights - . basic to life in human society show what humans need and deserve in order to live in a fair world. the

Human Rights &amp; Human Development A Vision for the 21st Century - . on 10 december 1948, the general assembly of

HUMAN RIGHTS - . right of everyone to the enjoyment of the highest attainable standard of physical and mental health Human Rights - . chapter 5. what are human rights?. a right is a legal ,moral, and social claim that people are entitled

International Achievements in Women’s Human Rights - . what they are and why they matter. you can’t make me do that!.

Human Rights - . the basic rights and freedoms to which all human beings are entitled. universal declaration of human