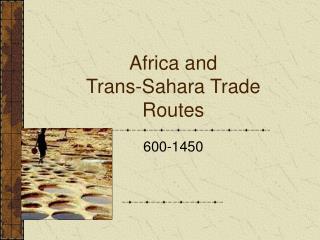 Trade Routes - . major trade patterns in the eastern hemisphere from 1000 to 1500 ad. silk road trading. where did the

Africa Before the Trans-Atlantic Slave Trade and the Trade Itself - . chy 4u. viccisitudes, under-water sculpture by

Phoenician Trade Routes - . traders of the mediterranean. background on the phoenicians. located on the eastern coast of

Eurasian Trade Routes - . china. tai zu, the founding emperor of the ming dynasty, died in 1398, leaving his grandson as