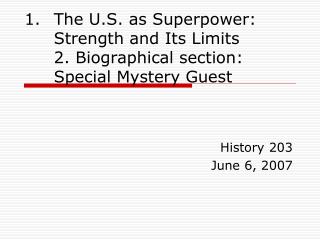 The U.S. as Superpower: Strength and Its Limits 2. Biographical section: Special Mystery Guest

The U.S. as Superpower: Strength and Its Limits 2. Biographical section: Special Mystery Guest

LIMITS - 2. limits. we have used calculators and graphs to guess the values of limits. however, we have learned that such

Calculus Chapter 1: Limits and Continuity - . caitlin olson honors project. what is calculus?. calculus is a branch of

Teaching with Love and Logic - . jim fay and david funk. 3 rules of love and logic. use enforceable limits don’t make

NEUROMUSCULAR ELECTRICAL STIMULATION - Theories of strength augmentation using nmes . based on the overload

Objectives for Section 3.3 Infinite Limits and Limits at Infinity - The student will be able to calculate infinite