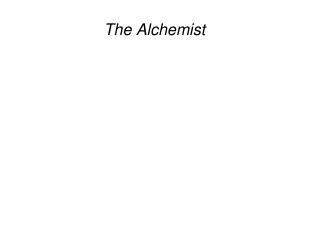 The Alchemist. Santiago? Significance in the name…. . In the early 9th century the tomb of the Apostle St. James "Santiago"  was found in Galicia, Spain.

History of Chemistry - . alchemy?. what is alchemy?. alchemy is the ancient art of trying to achieve wisdom and

Chemistry - . how did chemistry become a science?. http://en.wikipedia.org/wiki/history_of_chemistry. alchemy vs.

The Alchemist - . introduction. consider the following…. fully describe a goal or dream that you are working toward.

The Alchemist - . paulo coelho. about the author. born in 1947 in brazil before becoming a fulltime write, he worked as

Unit 1: Introduction to Chemistry - . this alchemist is searching for the philosopher’s stone. he should’ve just

Alchemist Vocab - . to practice using new vocabulary in a sentence. guide to success . you must be familiar with the

Key Terms for The Alchemist - . things to keep in mind as you read. king

THE ALCHEMIST - . a webquest of textual allusions in paulo coelho’s novel.

History of Laws of Motion - . definitions. force- push or pull, the units of force are newtons (n) friction- force