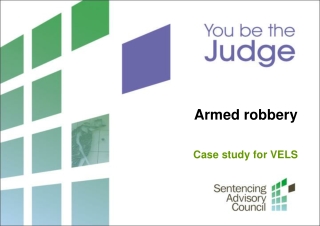 Armed robbery. Case study for VELS. 1. What is sentencing?. What laws guide a judge when sentencing?. Photo: John French / Courtesy of The Age. Chief Justice Marilyn Warren of the Supreme Court of Victoria. Who is responsible for sentencing?.

Chapter 12: Factors affecting access to sport and physical activity III – the institutional level - . homework in a

Notes: Criminal Psychology - . not in the book so pay attention . what is criminal psychology?. the application of

Describe causes and effects of Prohibition on American society - . temperance movement. a social movement against the use

Chapter 6: Criminal Law and Cyber Crime - . learning objectives. what two elements must exist before a person can be held

Justice - . applying laws people seeking justice are looking for the justice system to ensure those who do something

Framing crime prevention, capturing knowledge – 5Is and beyond - . paul ekblom. what we can teach master’s

WHAT CAN I DO WITH A MAJOR IN... CRIMINOLOGY &amp; CRIMINAL JUSTICE - . www.sc.edu/career. crim·i·nol·o·gy . the

Introduction to Law - . the creation of laws. what is law?. jurisprudence: the study of law and legal philosophy one