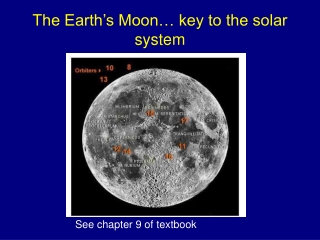 The Earth’s Moon… key to the solar system. See chapter 9 of textbook. But first… finish up from last time: the application of Newtonian physics to orbital motion. The solution to F=ma for a planet is an ellipse with the Sun at one focus (Kepler’s 1st Law)

Setting up Eclipse Locally - . cs 15 fall 2017. ready?. this guide assumes you have already gone through the working from

SETTING UP OUR JOURNALS - . 7 th grade math math extensions algebra i ms. chastain . step 1. number your pages in your

Setting up eduroam - . issue 2.0. course objectives. by the end of the training, you will be able to: describe eduroam

Setting Up QuickBooks - Lesson objectives. to discuss decisions that must be made before using quickbooksto create a new

Setting Up - . first, install tomcat and axis as described elsewhere. then copy tomcat into a second folder. i’ve named

Setting up itunes - . new user workshop 2/11/13. step 1. have it download itunes onto your computer open itunes go to

Setting Up Java - . cs0007: introduction to computer programming. things you will need. you must have: the java runtime

Newtonian Jeopardy ! - . newtonian jeopardy !. describe a force . a force is a push or pull on an object. what are the 2

Newtonian Jeopardy ! - . newtonian jeopardy !. final jeopardy. what is a force ?. a force is a push or pull on an object.

Newtonian Dynamics - . a note on usage:. the clicker slides in this booklet are meant to be used as stimuli to encourage