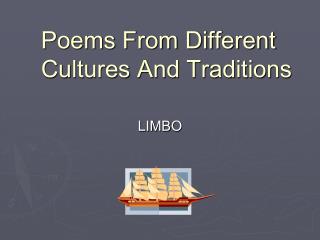 Poems From Different Cultures And Traditions

Poems From Different Cultures And Traditions LIMBO Kamau Brathwaite. The poet was born in Barbados. Brathwaite lived and worked in Ghana, Africa, from 1955 to 1962. He became active in discovering his cultural roots. Ghana. Brathwaite’s ancestors were transported from

Poems From Different Cultures And Traditions

download poems for mothers day - Get the short mothers day poem 2016 for this mammy day, mothering sunday sugary and

Poems from Different Cultures and Traditions - . 8e- term 3. overview. this term we will be studying poems from around

ESSENTIAL QUESTION: How did different cultures and traditions develop around the world? - . first americans. ice age –

Comparing poems from Other Cultures and Traditions - . you need to show that you can: read below the surface sustain and

Poems by Lord Byron - . she walks in beauty when we two parted to caroline so we’ll go no more a roving. poetry or

Poetry from other cultures and traditions: planning and introducing your essay - . paper 2: section a worth 15% of the

Poems - . limericks. short, humorous poems made in 18 th century (1700s) takes its name from a country in ireland that

I Wish… Poems - . i wish poems need to be realistic and actual wishes that you would want, not fluffy things like, “i

Poems - What makes a poem great?. poems. respond to the following poems. as you are introduced to a selected group of

Where I’m From Poems - . where i'm from by ella

Different Cultures Poetry - . the poems. this powerpoint will not teach you the poems – that has already been done and

Paper 2 Section A - . don’t forget to bring your anthology for this exam. poetry from different cultures. 45 minutes 1