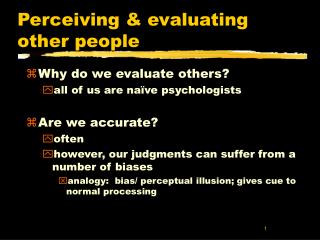 Perceiving & evaluating other people Why do we evaluate others? all of us are naïve psychologists Are we accurate? often however, our judgments can suffer from a number of biases analogy: bias/ perceptual illusion; gives cue to normal processing Attributions from behavior Attribution

Work Tests to Evaluate Cardiorespiratory Fitness - . objectives. identify the sequence of steps in the procedures for

Copy the following onto Portfolio p40 - . federalism – (allow 3 lines for a definition). lesson 8.3a : ratifying the

Evaluating information system effectiveness and efficiency - . section one - why study effectiveness? problems have

Evaluating for Developmental Delay - . jimmy treadway md. introduction. an estimated 12-16% of children have a