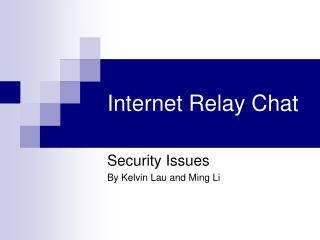 Relay - . a  relay  is an  electrically operated  switch . many relays use an  electromagnet  to operate a

Internet Safety: Social Networking - . social networking history. in 1982 the word “internet” is used for the first

Lesson 15 : Networks And The Internet - . at the end of this lesson, students should be able to;. communicate using