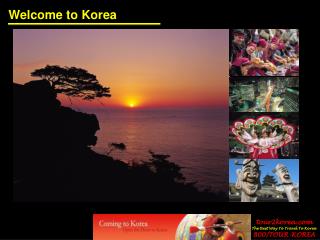 Welcome to Korea! - . namsan tower. seoul’s famous place, in the top of the namsan tower, you can see the seoul once a

Welcome to Korea Land of the Morning Calm - . from the window this is incheon international

Travel to Korea - To make your vacation memorable. from stunning natural scenes to various activities, all are able fill

Korea - . the bridge between china &amp; japan. location. korea is located on a peninsula. a peninsula is a

KOREA - . the cold war beyond europe. the korean war. a grief stricken american infantryman whose buddy has been killed

Korea - . one nation, two countries. geography. “shrimp between three whales” how has its geography affected korea?.

Korea - . a brief history oc ogburn 1/c warren. ancient history. evidence of inhabitants dating back to 4000 bc in 668 ad

At the Korean DMZ - Loudspeaker, checkpoints, surveillance and military drills at the border between north and south